Evolution of a Town
Close

To celebrate our move to the William Speers Building on Dundas Street West in the Junction THA has worked with Sarah King Head, CAHP (writer and historian), Kamila Hakimova (website designer)) to provide a series of accounts of the place we will soon call home.

Moving day approaches! And we continue our series of blogs on the history of the neighbourhood’s remarkable built heritage and its relevance to our contemporary world.

The railways brought prosperity to and they shaped the West Toronto Junction’s evolution as a town in a way that would have been unimaginable to inhabitants who had lived within this landscape for so many millennia.

The decision by American-born Daniel Webster Clendenan to purchase 100 hectares of the Keele Estate and register the West Toronto Junction subdivision with his uncle John M. Laws as Plan 553 in 1883 illustrates how quickly fortunes could be made in rural Ontario – but especially those in proximity to bigger centres like Toronto.

The plan laid out village lots south of Dundas bounded by Keele, Lake View (now Evelyn) and Bloor streets with Pacific and High Park avenues intended to showcase the homes of the more wealthy residents.

The first post office was established in 1884 and by 1 January 1888, the community of nearly 1000 residents was able to earn village incorporation by provincial assent – with Clendenan as its first mayor! Amalgamation with the smaller, nearby communities of Carlton and Davenport a year later swelled the population to 3000 – and by 1891, the Junction’s expansion to more than 4,500 people helped support the claim that ‘a more hustling and prosperous town … is not to be found anywhere in Her Majesty’s Dominions.’

The intersection at Dundas and Keele streets became the main commercial centre of the junction town; along these and other main commercial streets came three-storey, mixed-use buildings. James Hall (1888), the W.H. Ives Tailor Building (1889) and the Campbell Block (1889) were all built between Keele and Pacific on Dundas Street West and all designed by the Junction’s first local architect, James A. Ellis. 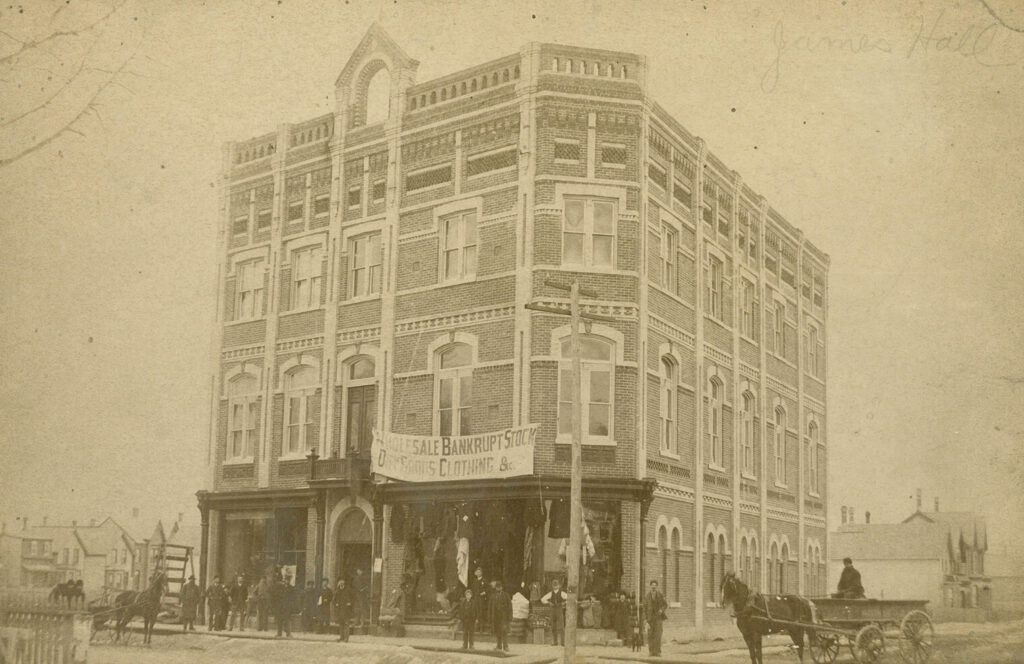 Prominent domestic architecture was also being built in the area, with the home of village’s fifth (and cousin to the first)  mayor George Washington Clendenan (1889) being among the most impressive.

It was located down the road from what had been the first brick house on Dundas Street West at Keele: Col Thomson’s Aikenshaw (1840).

This house, along with its vineyards extending north of Dundas Street and south of the Credit Valley railway, would have stood sentinel as wealthy businessmen transformed the area in the 1880s with impressive houses – like the home of the former market-gardener Peter Laughton, who had made his fortune at Dovercourt and College before moving to the Junction.

Things couldn’t have looked better to developers when the CPR established its Ontario headquarters at the Junction in 1889. But the momentum of growth in the town slowed in the mid-1890s. One of community’s earliest historians A.B. Rice explained that speculation bubbles had lulled greedy developers and businessmen into a ‘fools’ paradise’. adding, that this caused some to think of the Junction as being like Goldsmith’s ‘deserted village’ and Bunyan’s ‘slough of despond’.

Economic depression in the years before the turn of the century forced many landholders to default on mortgages or abandon properties – and almost saw the town declare bankruptcy. A persuading factor in the agreement to amalgamate with the City of Toronto in 1909, the downturn helps explain the two distinct phases of development we can see along Dundas Street West: in the late 1880s and again after 1900.

By 1909 only 40 percent of the area had been developed – a skeleton of land-use patterns had been established with residential development focused south of Dundas, with mixed-use development poised to emerge at prominent corner lots and along the major commercial arteries – all anticipated in Clendenan and Laws’ subdivision.

More than a century later, the built heritage context resonates in its streetscapes. So much of the original building stock still intact: industrial spaces that can be adapted into sustainable and liveable neighbourhoods, existing housing and commercial buildings are still vibrant with use and regeneration, including north to the former stockyards adjacent to the railway corridors.

Today the Junction offers a wide range of cultural heritage, expressive of diverse and inclusive global populations who experience the area for work, to shop, socialize and live.

As one of the most distinct neighbourhoods in Toronto, we see the Junction’s resilience as a perfect location to focus on regeneration. THA is proud to be moving into a place where civic spirit and commitment has embraced transformation as a template for a community to prosper and grown.

Fancher, D. Ed. The Leader and Recorder: History of the Junction. Toronto: WTJHS, 2004.

Illustrated Toronto: The Queen City of Canada – Its Past, Present and Future. Toronto: Acme Publishing and Engraving Company, 1890: http://static.torontopubliclibrary.ca/da/pdfs/37131055466361d.pdf

Myrvold, B. and Forsyth, B. The Most Attractive Resort in Town: Public Library Service in West Toronto Junction, 1888–2009.

Rice, A.R. Stray Thoughts about Matters of Public Concern [14 April 1949], in History of Toronto Junction: As Written for the Toronto West Weekly. Toronto, 1950.